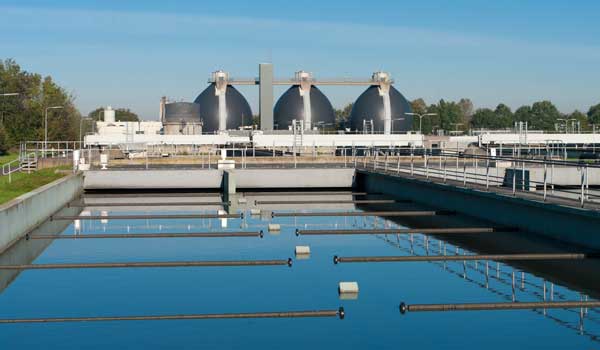 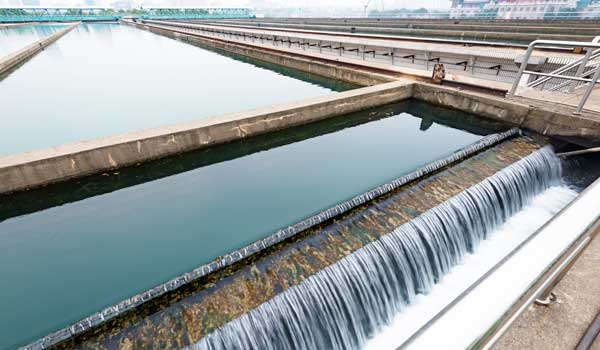 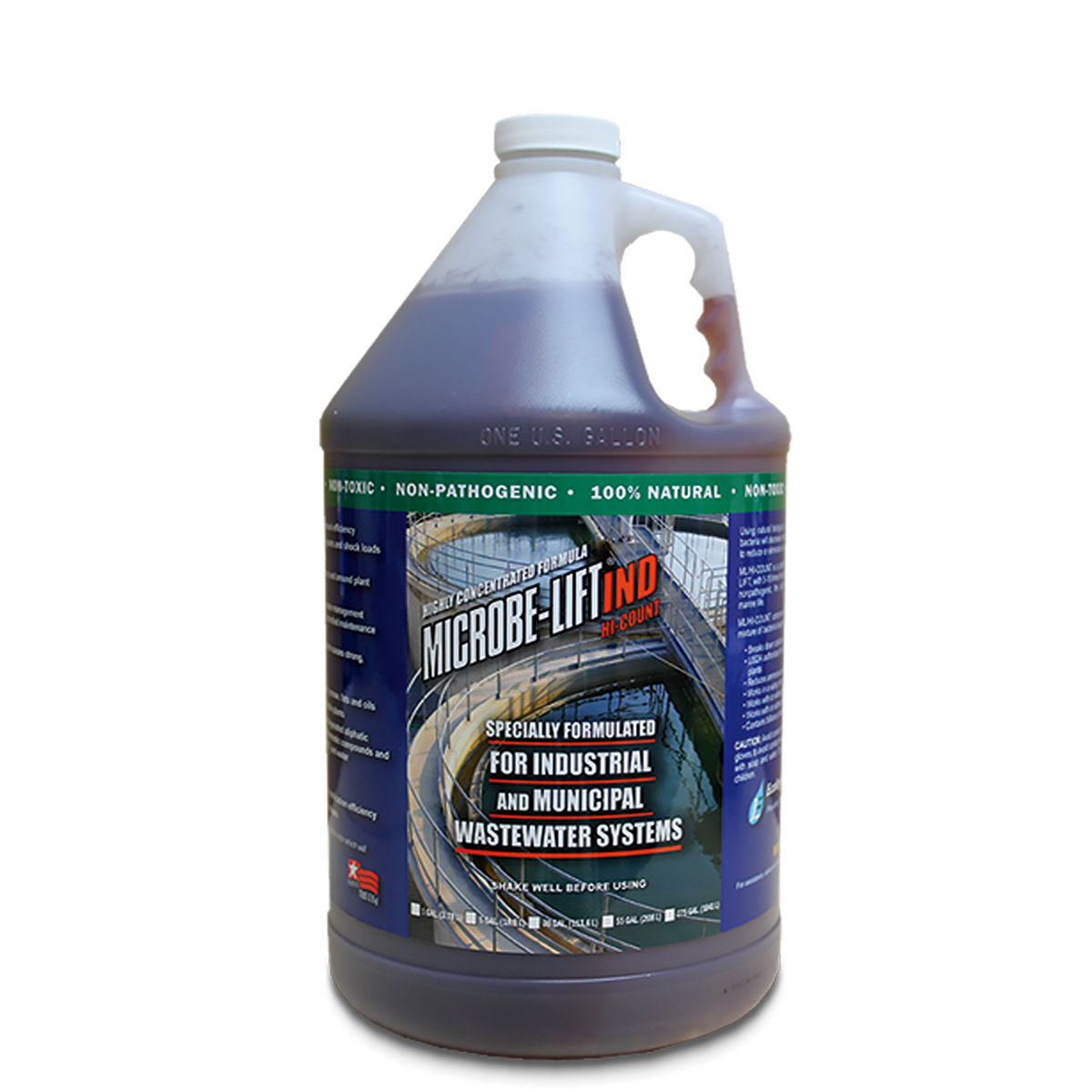 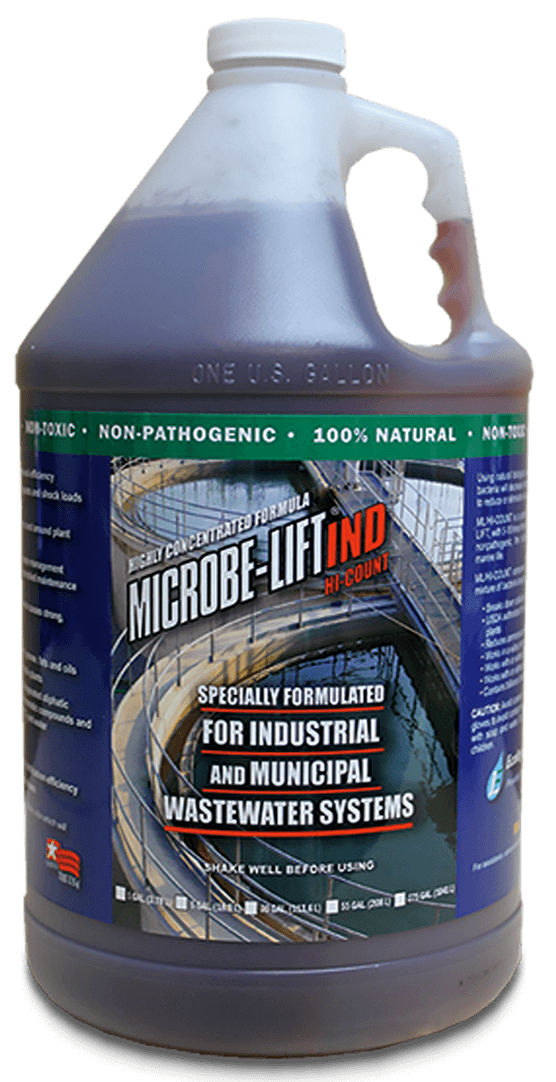 Product Description:
MICROBE-LIFT / IND contains highly specialized microorganism that are selected and designed specifically to speed up the biological degradation of problem compounds in wastewater system. 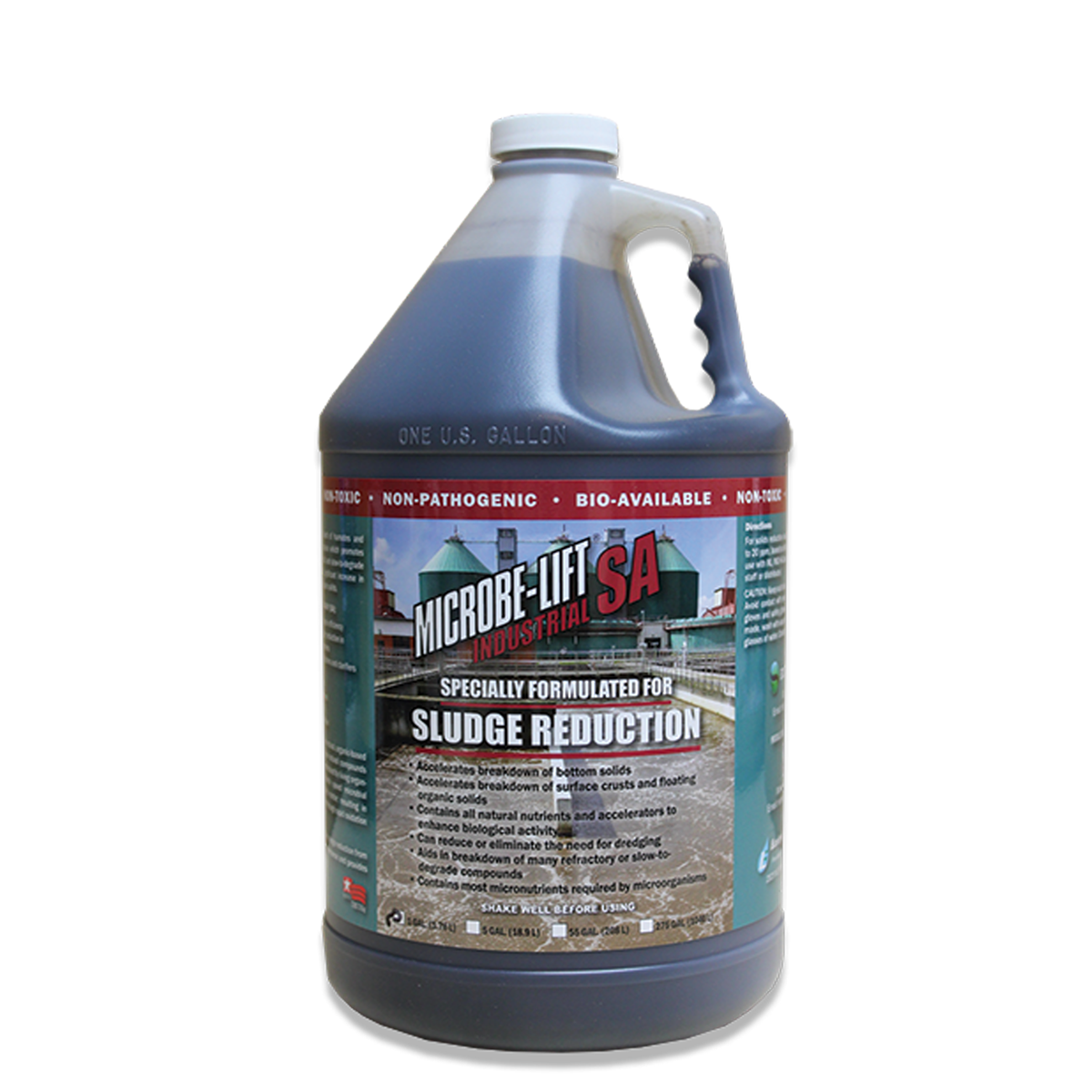 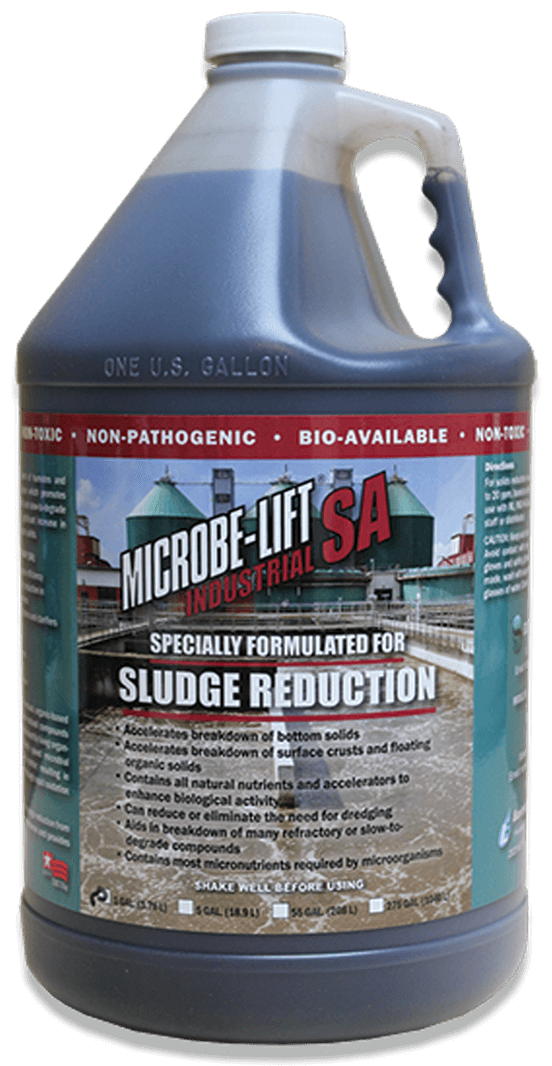 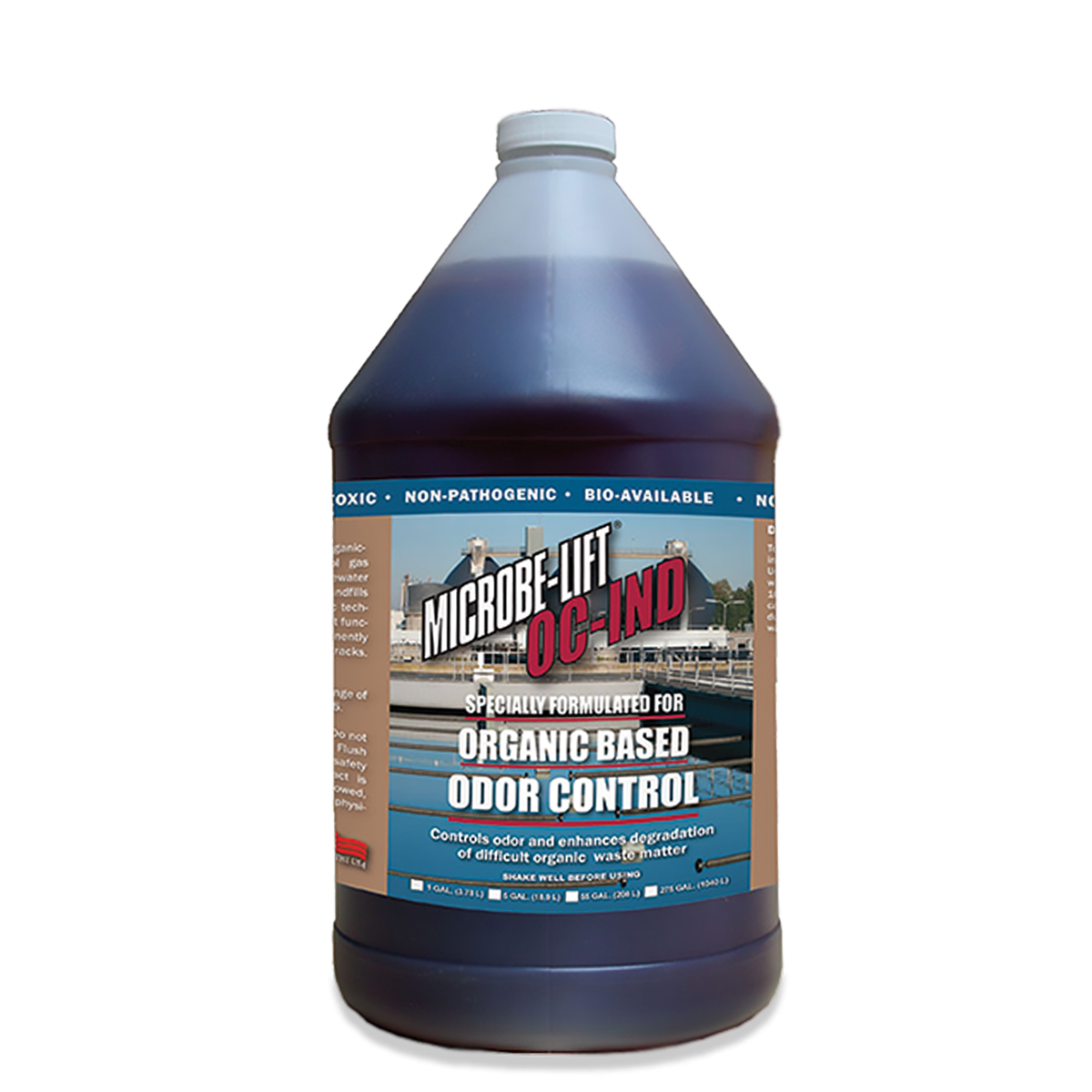 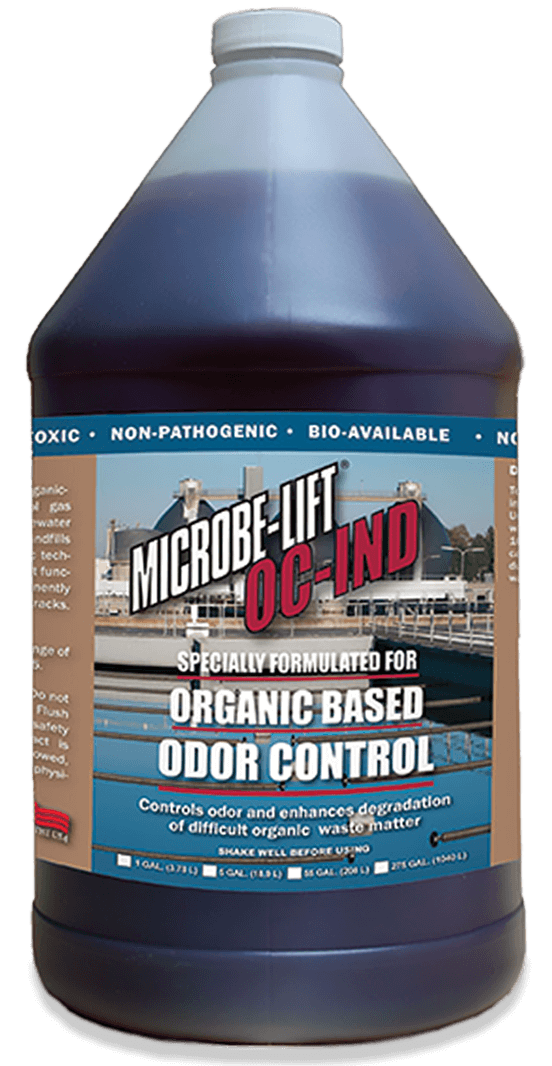 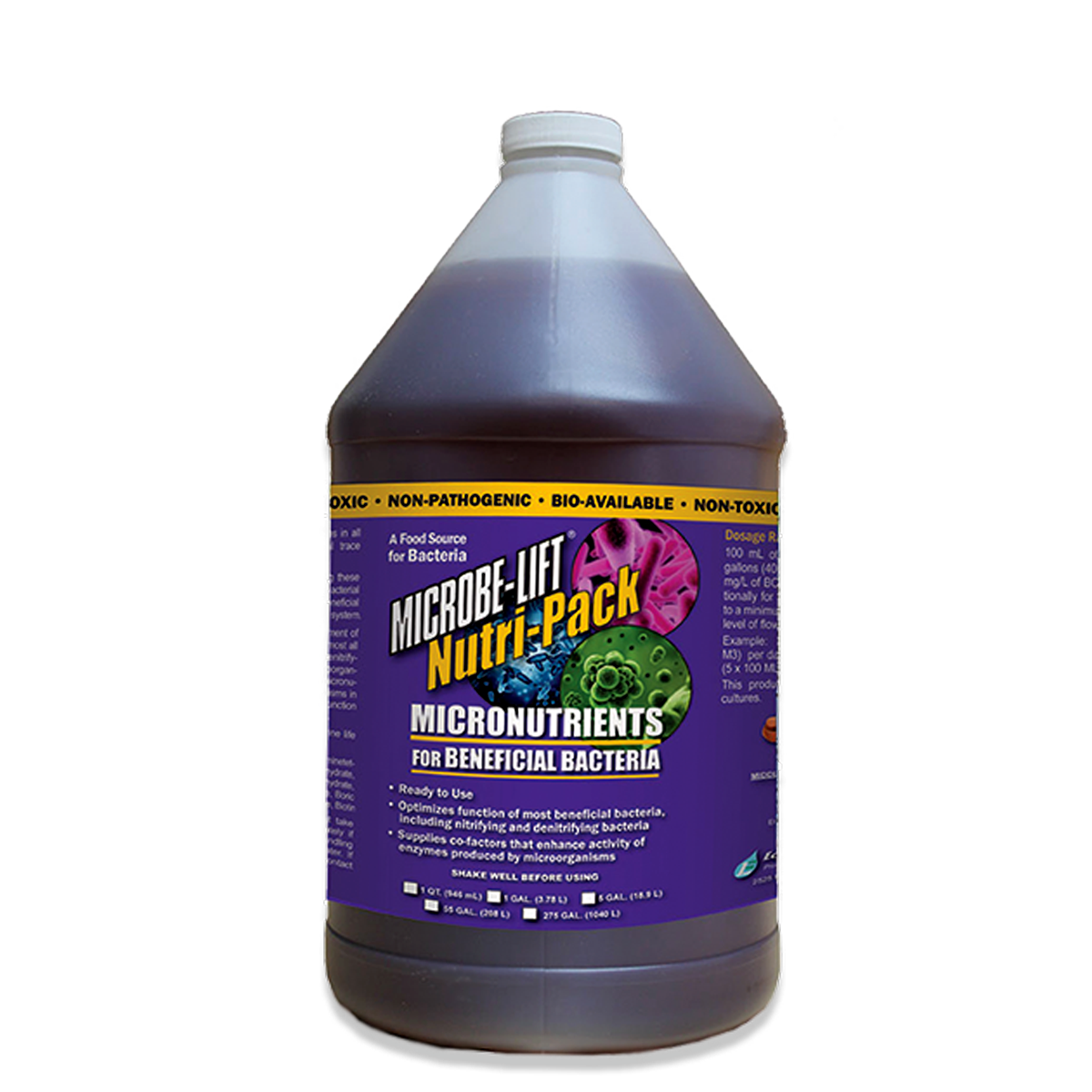 Micronutrients to Supplement Bacteria in Ponds and Lagoons 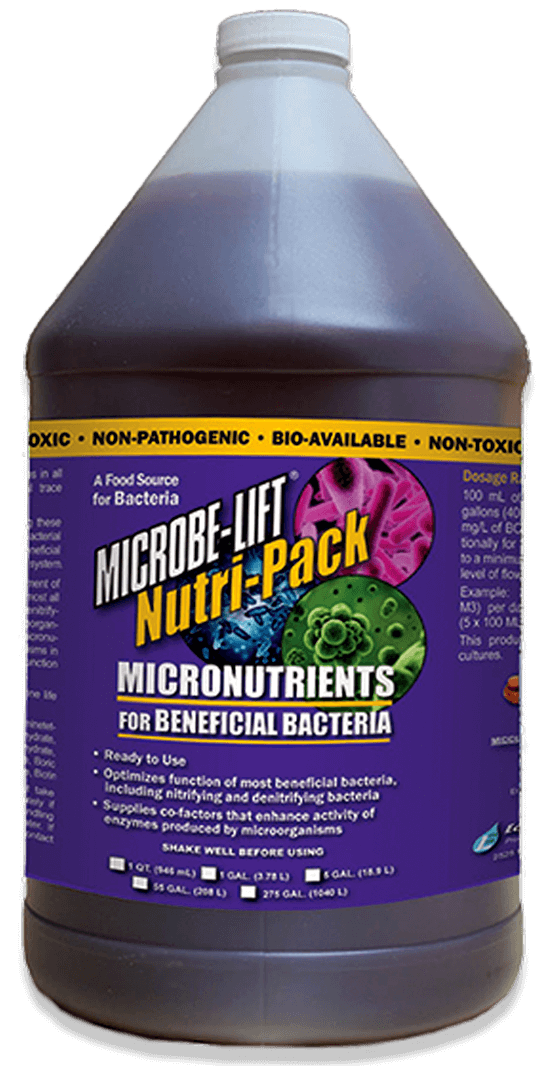 Product Description:
MICROBE-LIFT / Nutri-Pack contains the full complement of essential minerals and micronutrients required by almost all beneficial microorganisms, especially nitrifying and denitrifying bacteria. By assuring that these beneficial microorganisms are not deficient in any essential minerals or micronutrients, the beneficial bacteria and other microorganisms in your pond will function optimally in all types of environments and conditions. MICROBE LIFT / Nutri-Pack does not contain bacterial cultures. 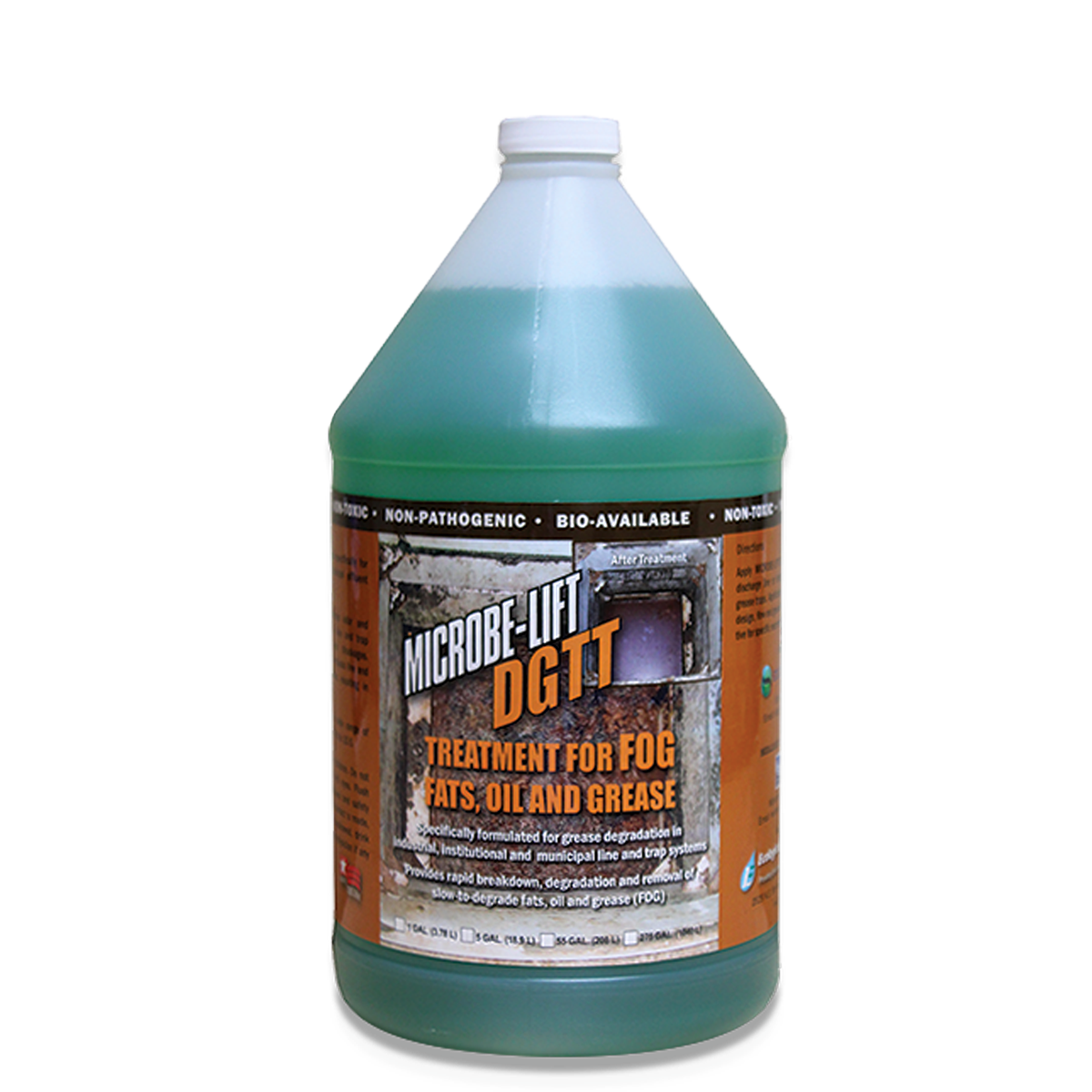 All industries with heavy fat, oil and grease 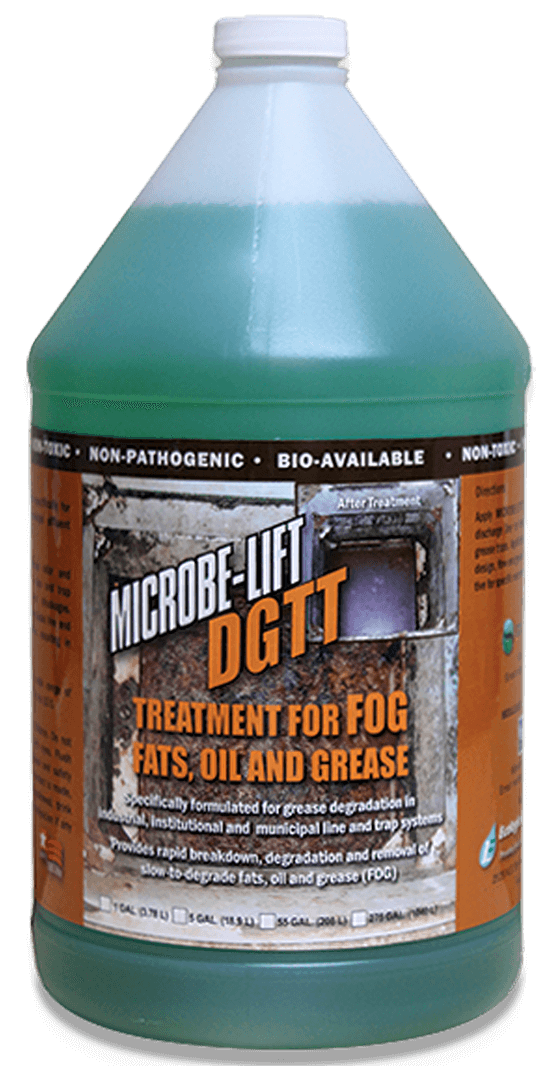 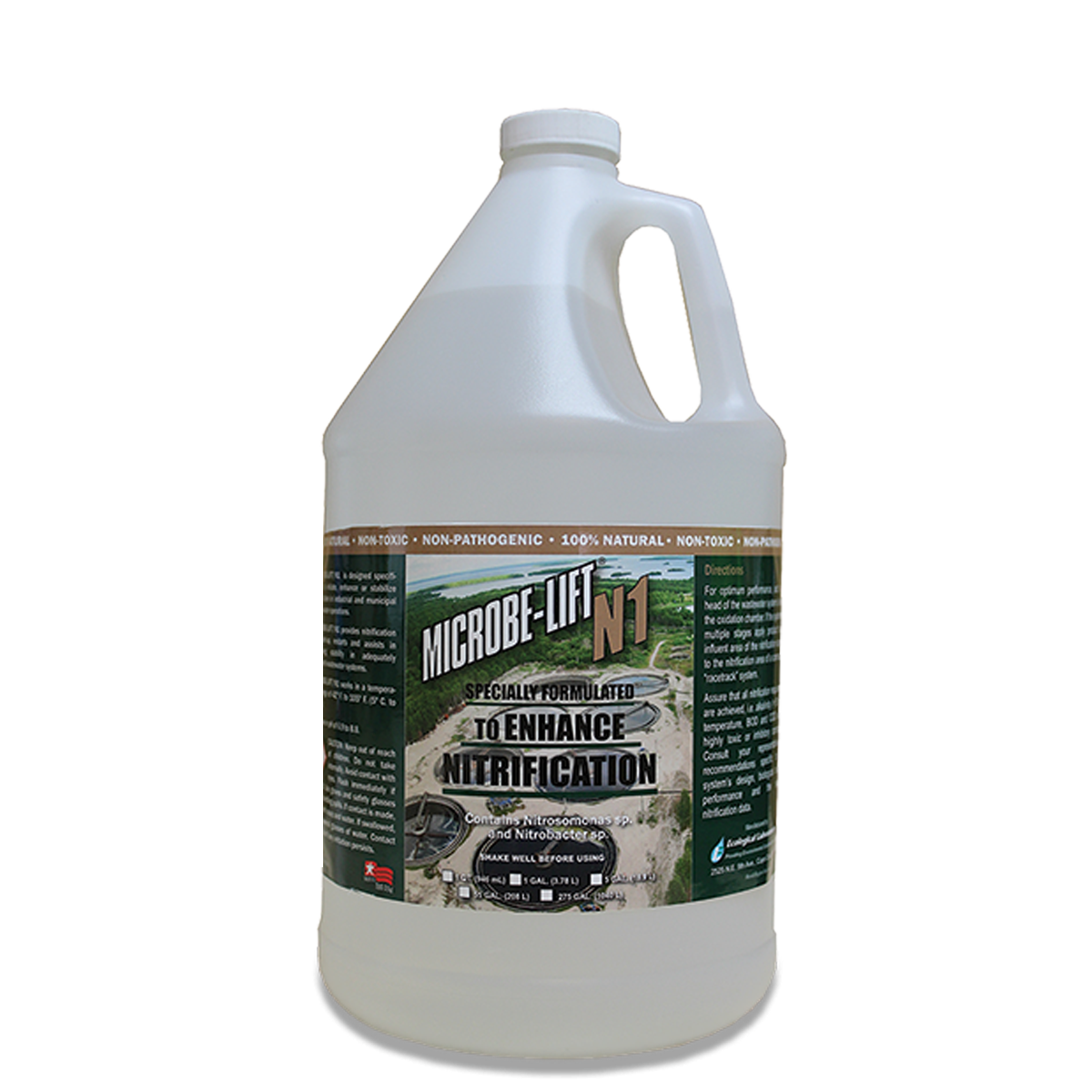 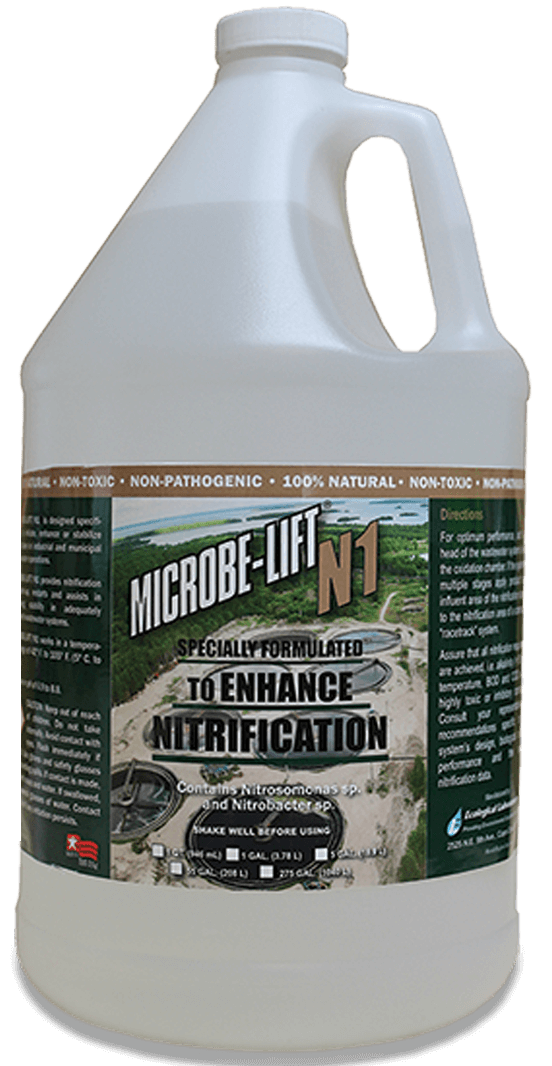 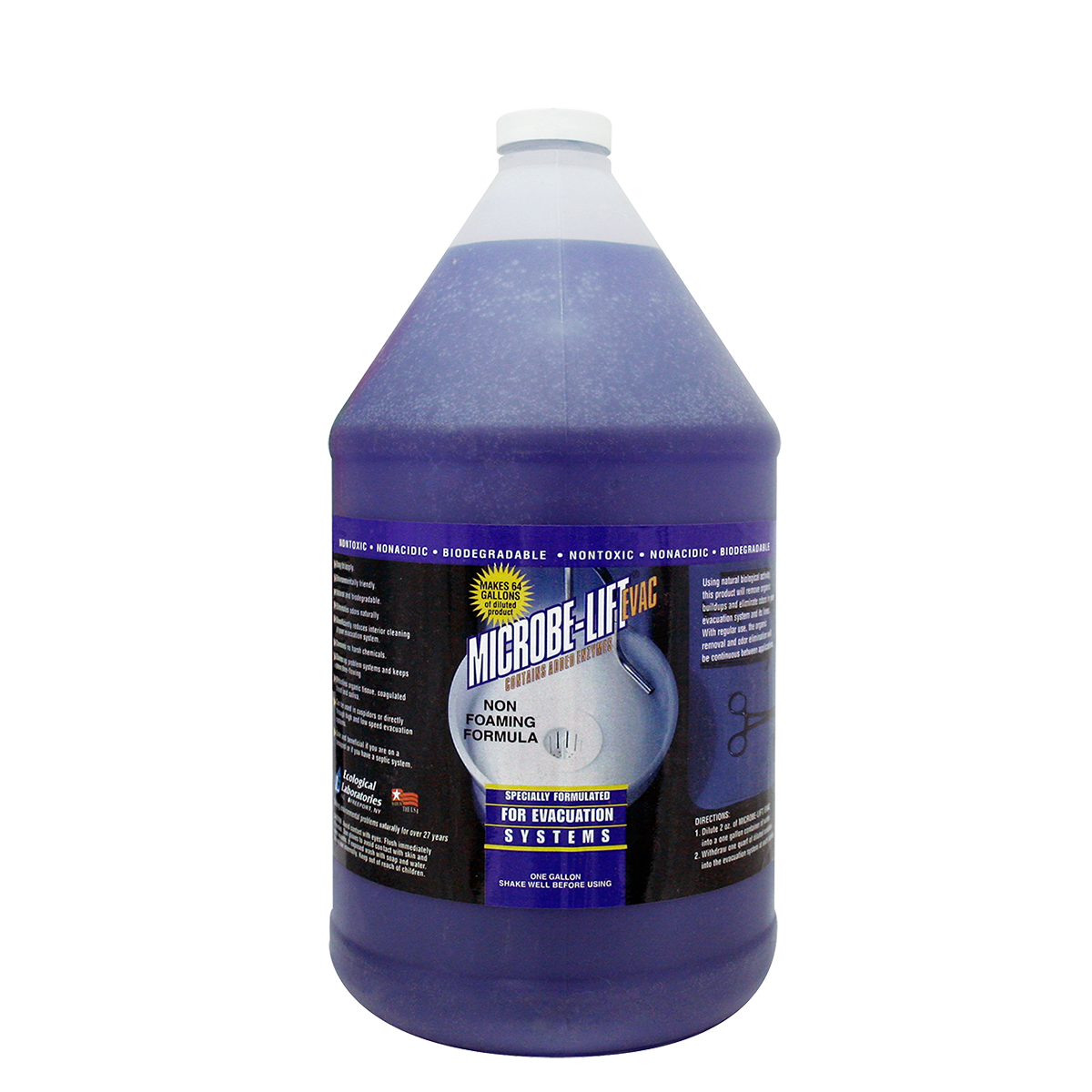 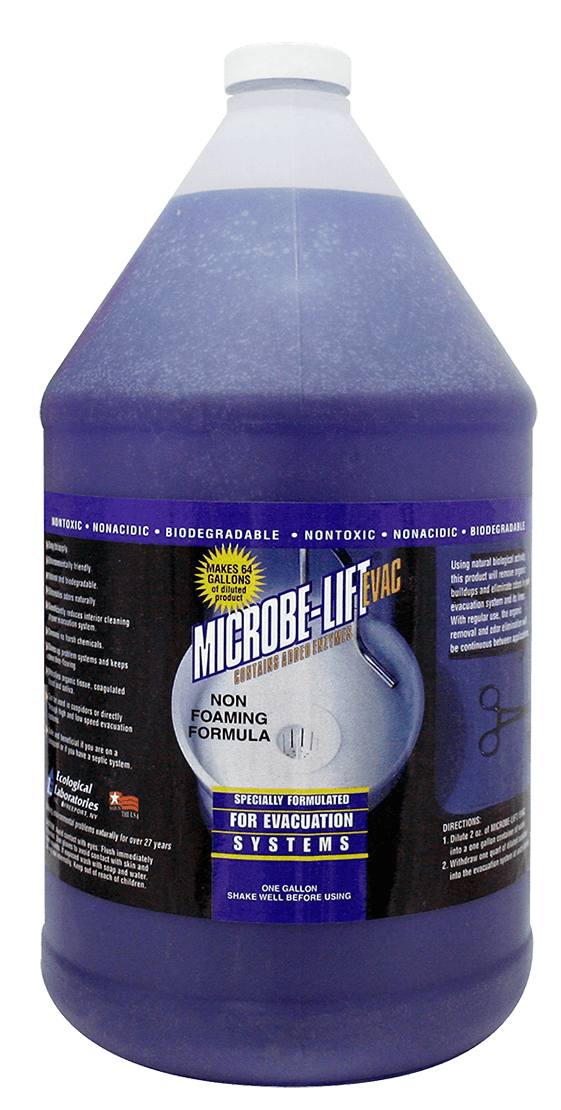 Product Description:
MICROBE-LIFT/EVAC can reduce or eliminate the incidence of blockages in drain lines from evacuation systems by getting to the core of the problem.

Specially formulated for Evacuation Systems. This highly concentrated gallon contains the highest microbial count in the market today. MICROBE-LIFT/EVAC is very economical to use.

While MICROBE-LIFT/EVAC cannot breakdown amalgam, a mercury alloy or reacted molding (while many of the monomers or reagents can be broken down, once reacted, molded materials are relatively inert and not amenable to biological treatment) it can break down the proteins, blood, mucoproteins, etc. in the mucus and saliva which forms the matrix that binds the other particulates that go down the drain, resulting in a clog.

Product Specification:
Easy to apply
Environmentally friendly.
Natural and biodegradable.
Eliminates odors naturally.
Significantly reduces interior cleaning of your evacuation system.
Contains no harsh chemicals.
Opens up problem systems and keeps them free-flowing.
Dissolves organic tissue, coagulated blood and saliva.
Can be used in cuspidors or directly through high and low speed evacuation systems.
Safe and beneficial if you are on a cesspool or if you have a septic system. 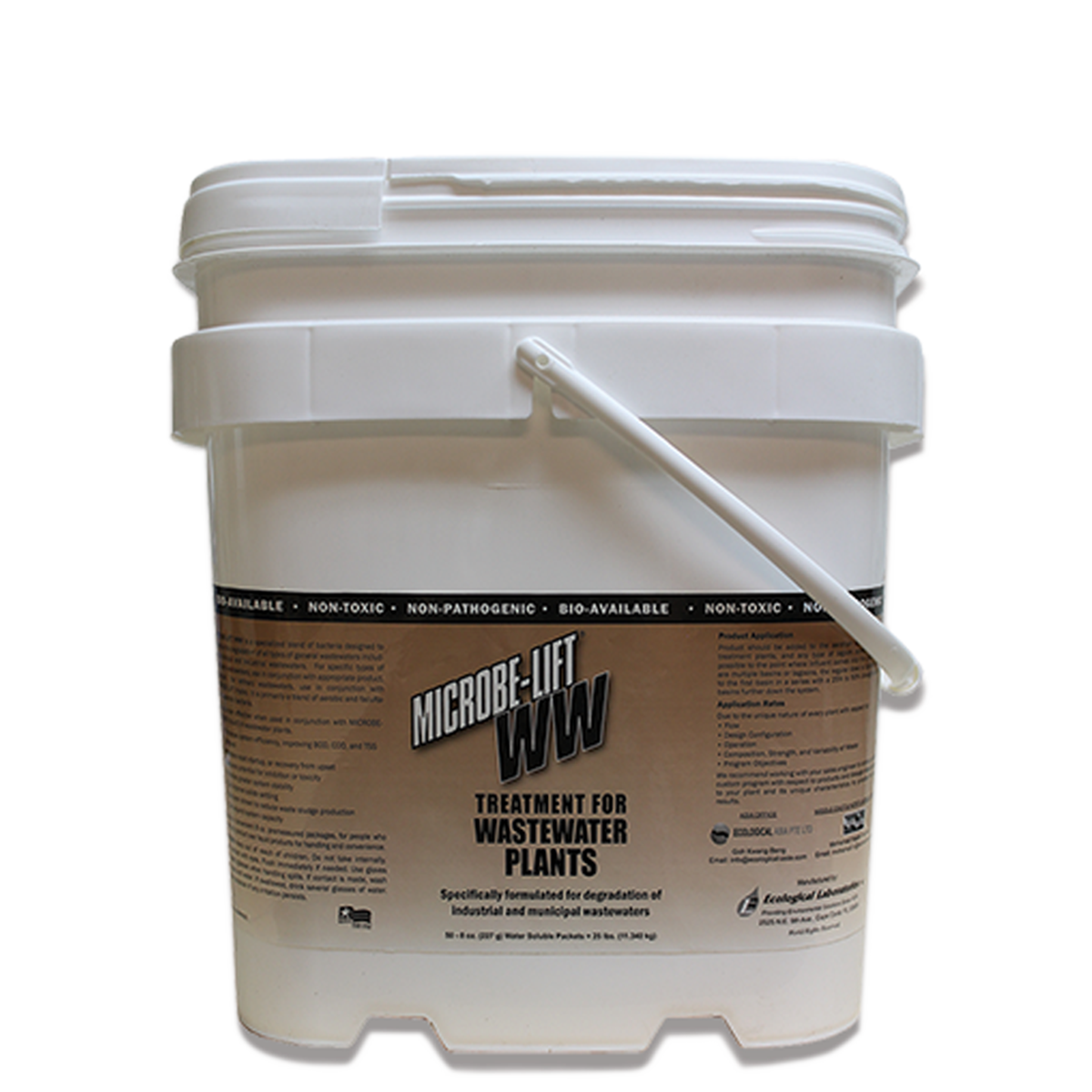 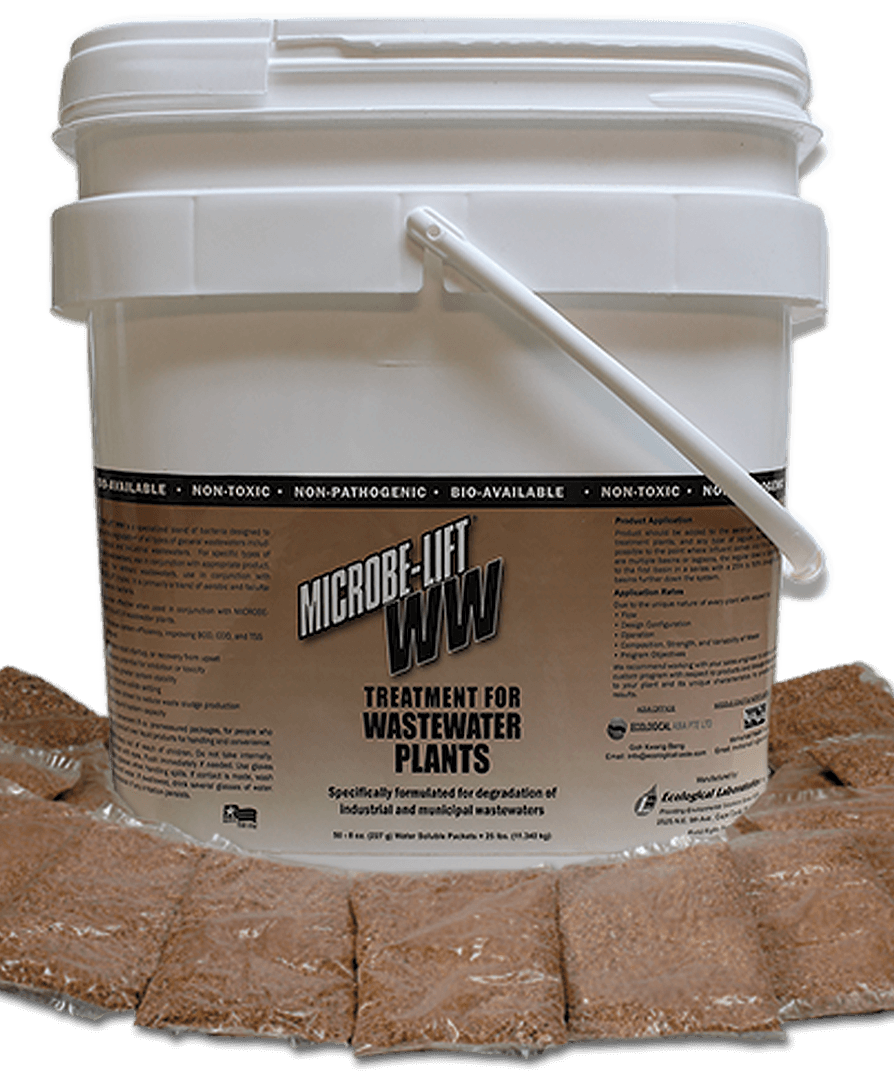 MICROBE-LIFT / WW contains a blend of select microorganisms with a specification of 5 billion microorganisms per gram. These cultures are designed to enhance the biological oxidation of slow and difficult to degrade compounds, there-by improving overall wastewater system performance and stability. 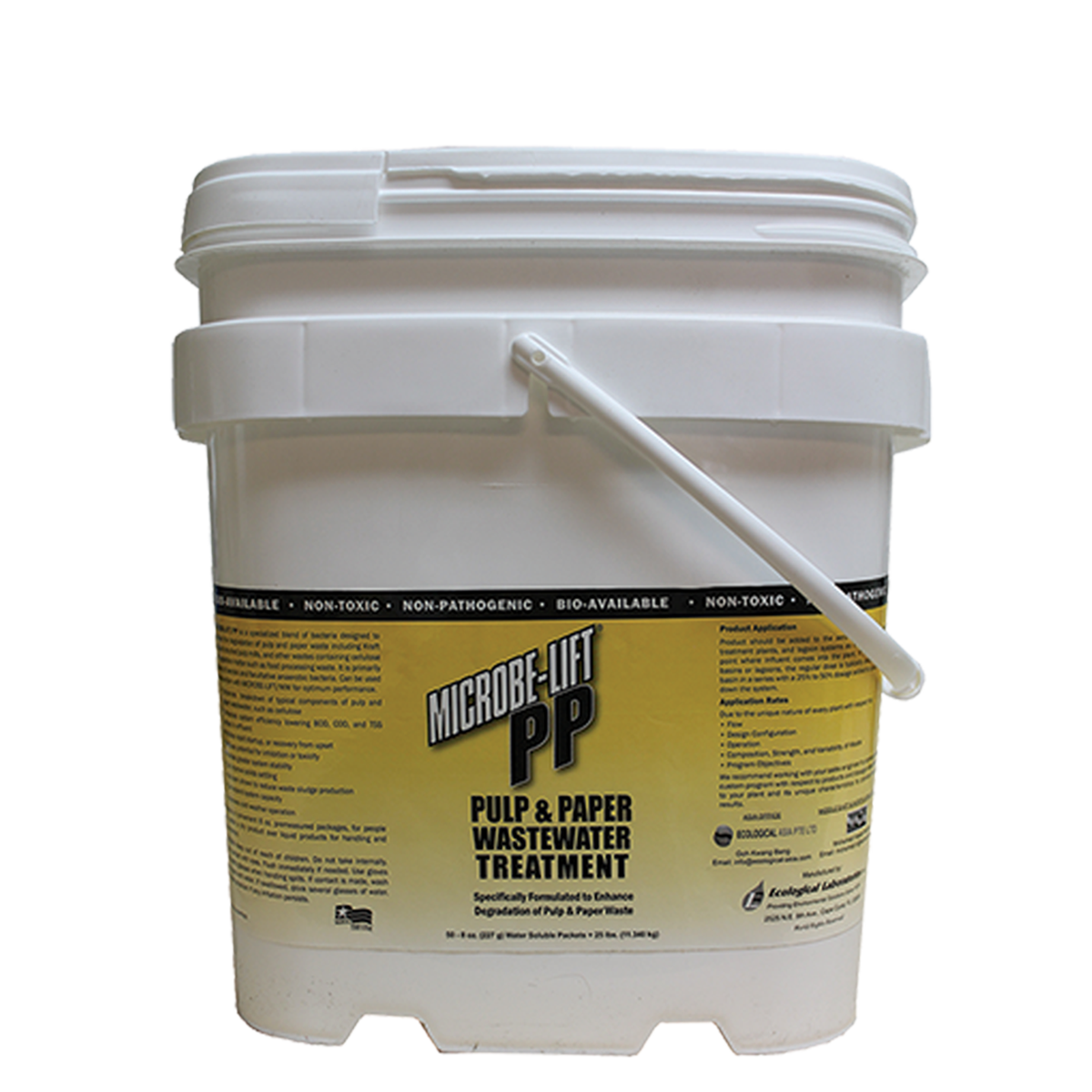 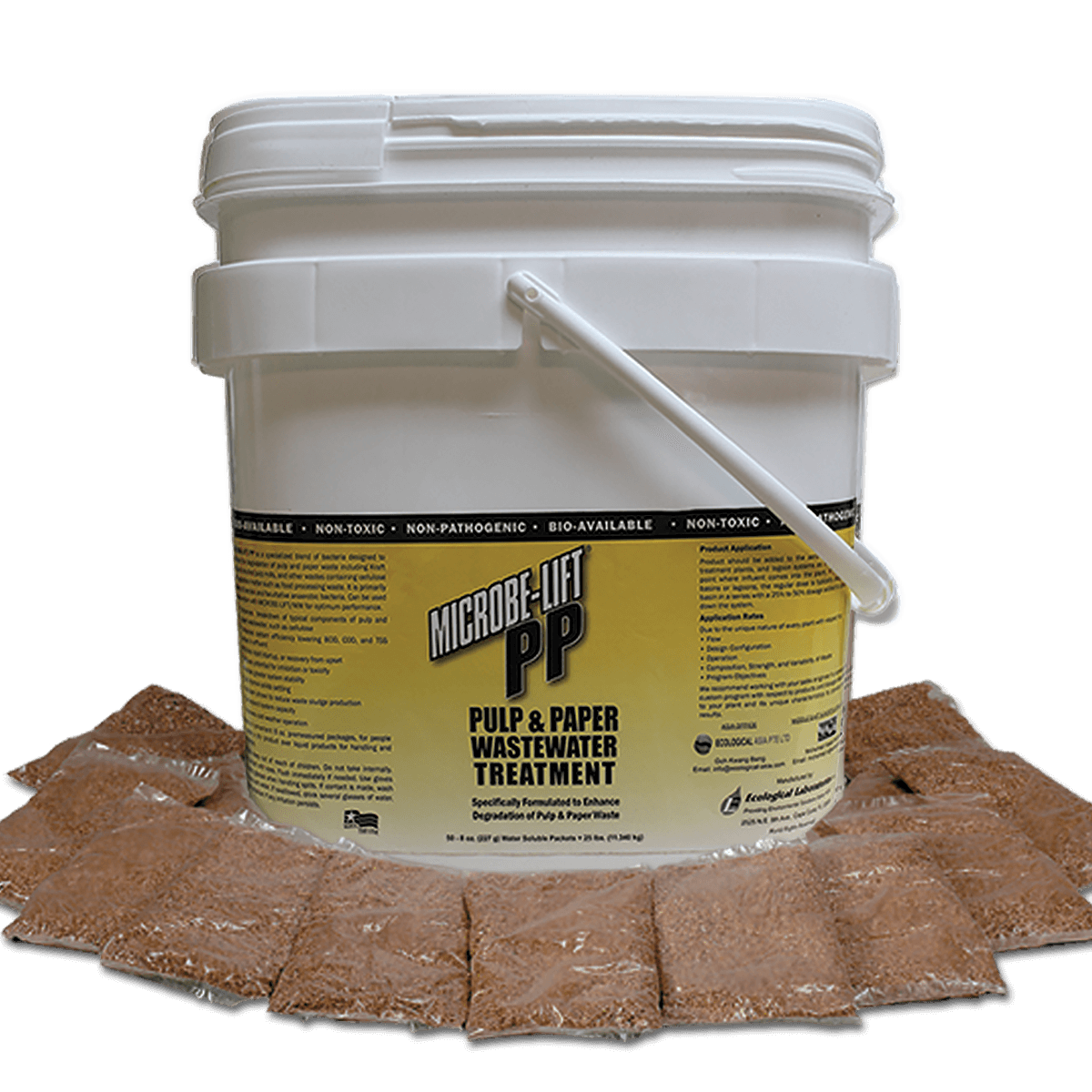 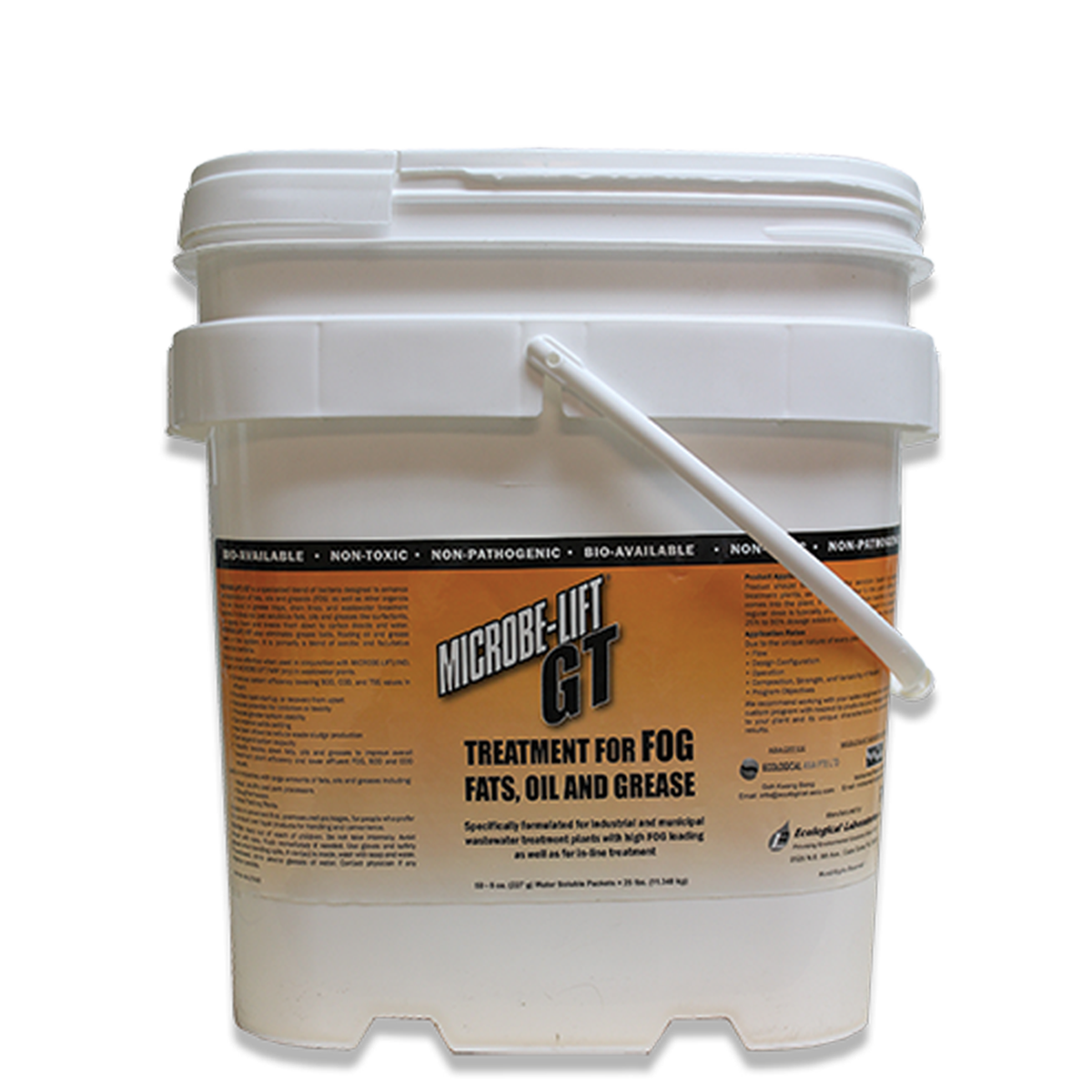 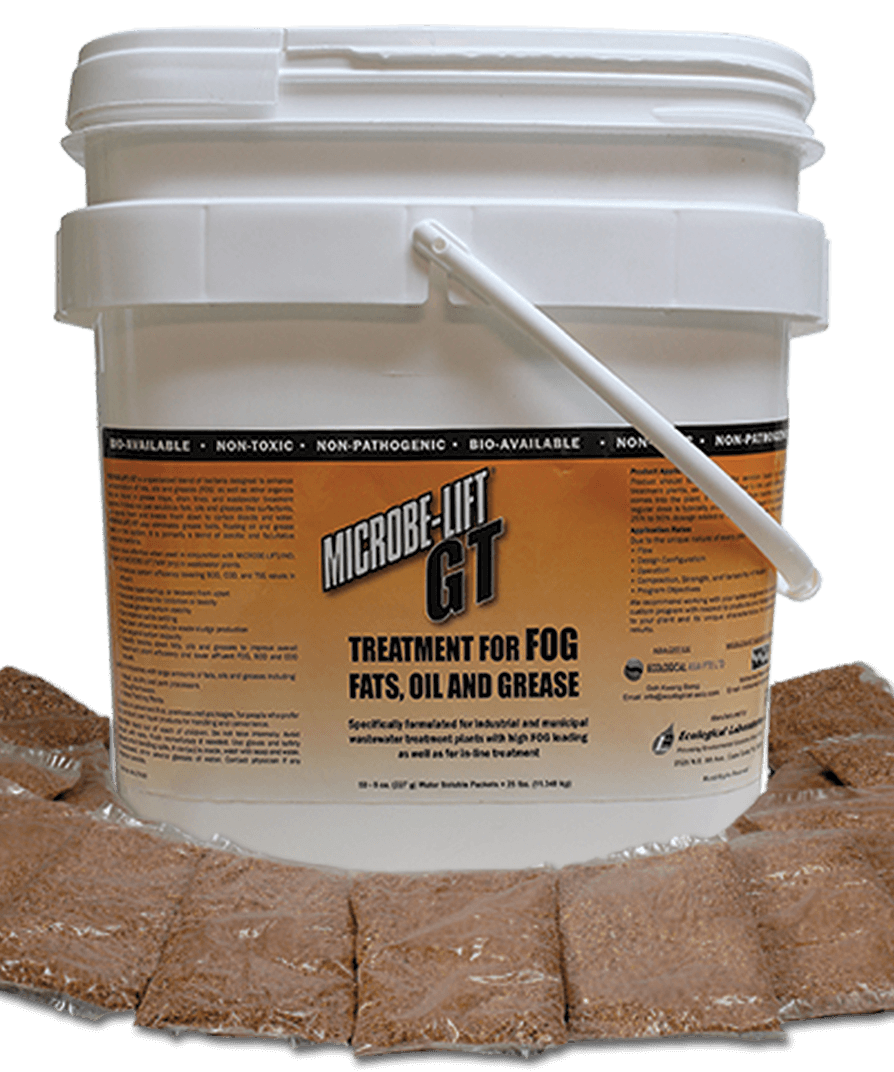 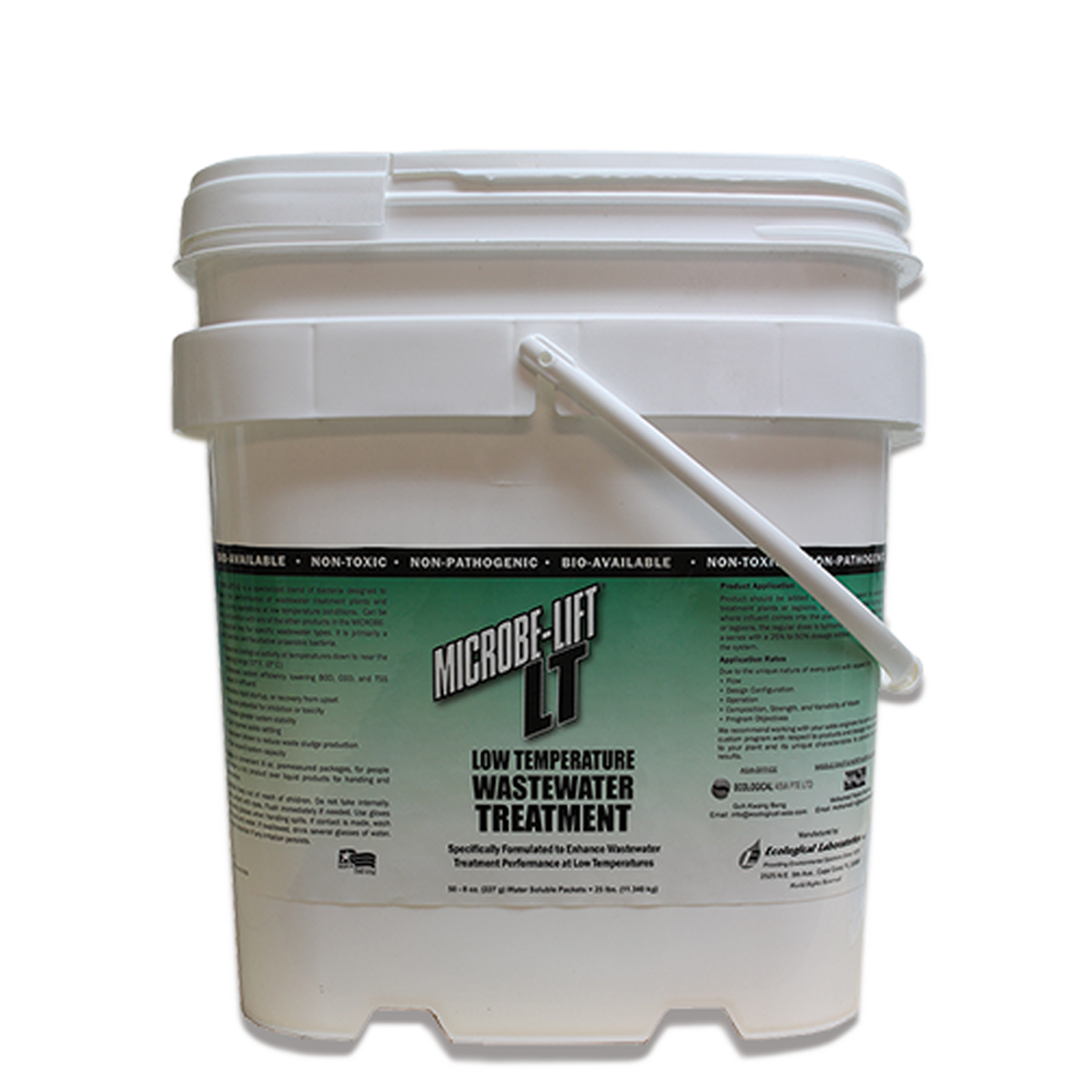 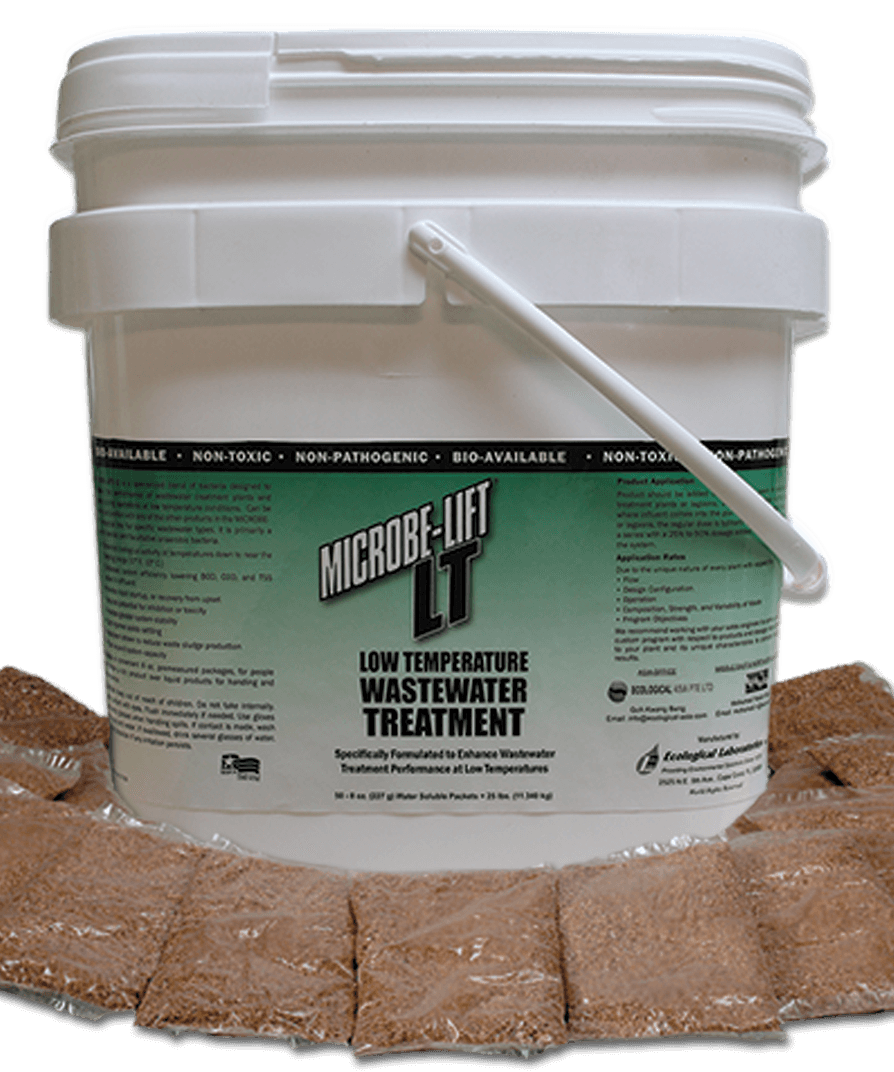 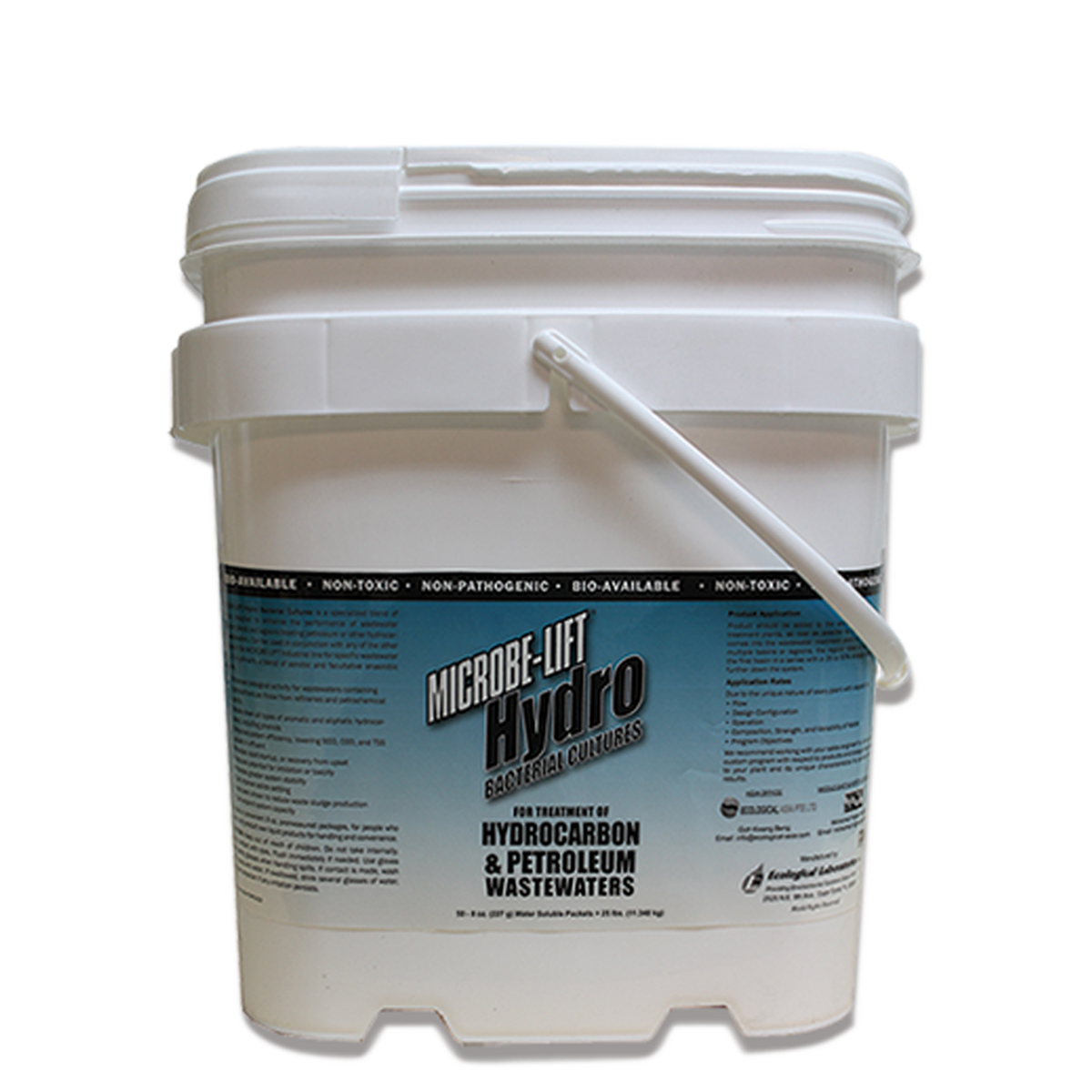 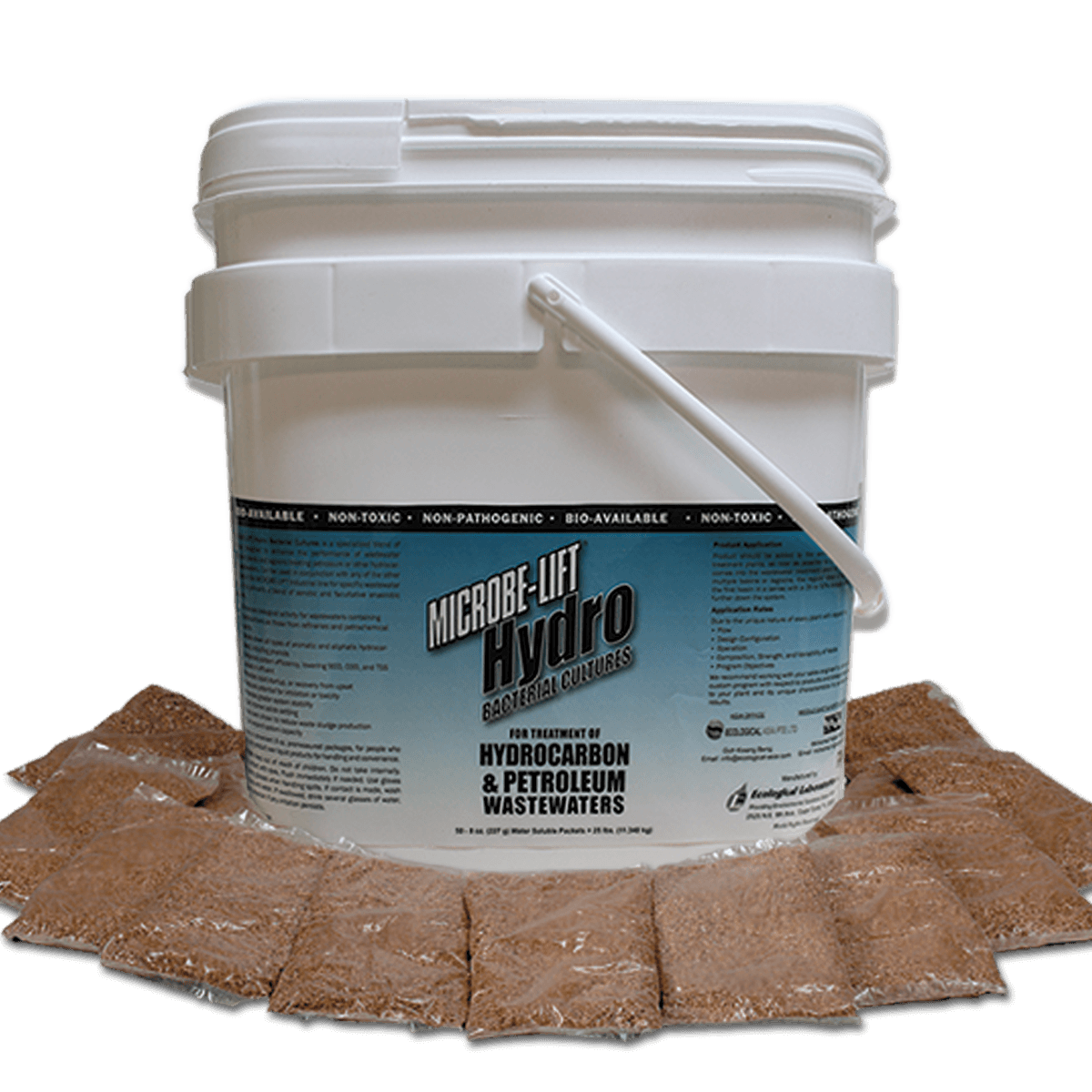 Background: Ecological Laboratories Inc. was contacted by Empresas Publicas to determine if bioaugmentation with MICROBE-LIFT® technology could assist in the operation of their anaerobic digesters. The facility consisted of two anaerobic digesters of 7,900 m3 each. The average flow rate was 1.8 m3 per second giving an average hydraulic retention time (HRT) of 21 days. The VSS reduction being achieved prior to the bioaugmentation program was approximately 30% for both reactors.

Objective: The objective of the program was to reduce odors associated with the operation of their anaerobic digesters and improve VSS reduction. After thorough evaluation of their system, a plan was developed using MICROBE-LIFT® technology. On the first day, the reactors were dosed at a rate of 12 mg/l based on the volume of the reactors. Thereafter, a weekly dose of 4 mg/l was applied for the next four weeks, followed by a 1.5 mg/l weekly maintenance dose.

Results Achieved: Six weeks after the initial dosage, VSS reduction had been increased to 37% versus a target of 50%. This improvement allowed the plant to handle the existing load without the immediate addition of a third reactor.

The plant also achieved significant reduction in odors in and around the plant. 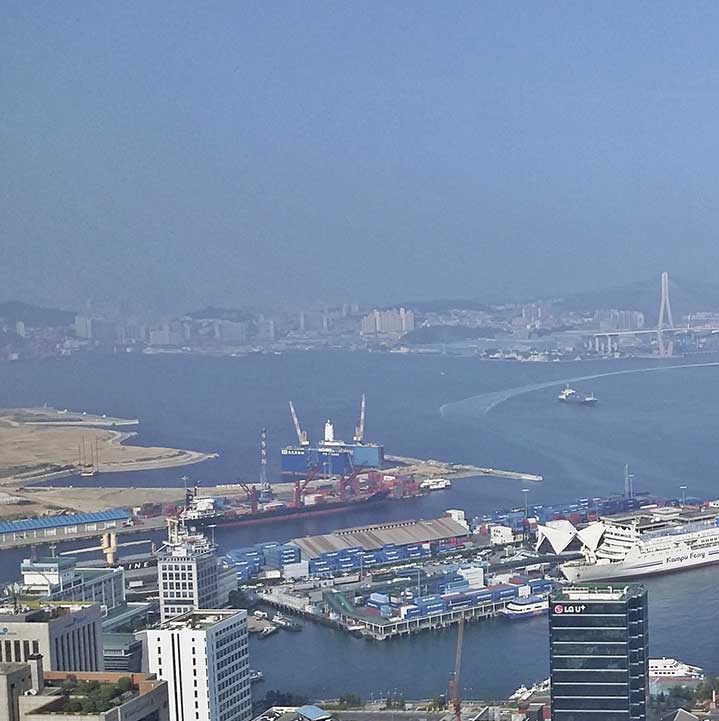 Background: Busan is the second largest metropolis in South Korea. With a population of 3.6 million, it is second in size only to Seoul. With rapid urban development the city of Busan was continually challenged with increasing wastewater treatment demand. The city’s anaerobic digester was only functioning at 70% of design efficiency based on volatile suspended solids (VSS) reduction.

Objective: In 1999, Ecological Laboratories was approached by the City of Pusan in Korea about the use of one of it’s bacterial products to improve the efficiency of it’s anaerobic digestors, which were functioning at 70% of design efficiency based on volatile suspended solids (VSS) reduction. While a version of the product had been used in septic tanks, primarily an anaerobic environment, with good success, the product had not been applied to commercial size anaerobic digestors.
Pilot studies were conducted in 5,000-liter pilot reactors that remained from the original design work on the digestors. With encouraging results achieved in the pilot trials, field trials were later pursued.

PROBLEM: A WWTP in Southeast Georgia located on a resort island has a 3 million gallon per day flow. The WWTP was experiencing major odor problems at the head of the plant, as well as poor digestion and settling of bio-solids in the SBR’s and aerobic digesters. The odors were primarily H2S and were the source of numerous complaints from the residents living in the vicinity of the WWTP. The plant was hauling and disposing an average of 125 to 150 tons of bio-solids per month at a cost of approximately $60 per ton, which equates to $7,500 to $9,000 total average hauling/disposal charges per month.

SOLUTION:MICROBE-LIFT®/IND was added to the influent of the wastewater stream approximately 100 yards before the head of the plant. The product was added at a rate of 3-4 PPM of the daily flow volume (3 million gallons). Odors were immediately reduced at the head of the plant. Within 2 days the plant operator began to see a significant reduction in solids in the SBR’s as well as the digesters.
The WWTP was treated for a period of 30 days at a rate of 3-4 PPM. The plant operator also added 2.5 gallons of product directly into the digesters each day.

Results: During the first month of treatment the odors being generated at the head of the plant were dramatically reduced. No odor complaints from the residents were received during first month of application. The total waste solids for the 30-day period were reduced from an average of 125 tons to 4 tons (96.8% reduction). The plant saved $7,260 in hauling/disposal expense during the month. The improvement in overall plant operation also allowed for fewer man-hours being needed to run the plant. 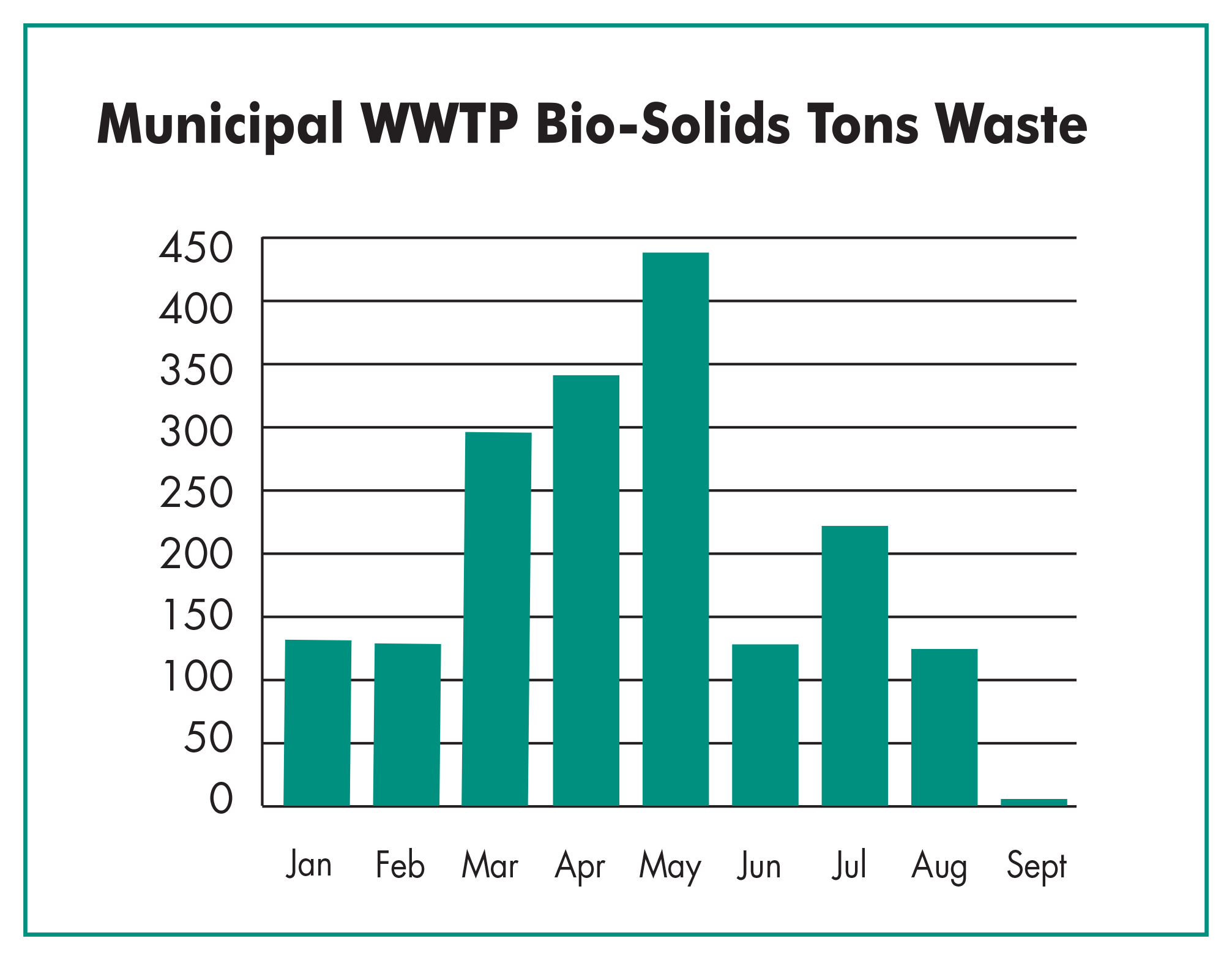